This is a script I read off for my “how to do a fan kick on the pole” tutorial which can be found here https://www.youtube.com/watch?v=2bWajoyLLg8

Fan kick, clocks, windmill, or whatever you call this trick is what we’ll be covering in this video. This is a beginner trick that can be performed on static or spin pole, and can be spiced up with a few variations I’ll be introducing.

At the core of this movement, we have this fan-like motion our legs are moving in. So focusing in on this motion, starting on the floor next to our poles, you can see I begin this movement by shifting my hips away from the pole, followed by opening up my top leg in a circular motion. The second leg follows in the same motion landing on top of the other leg. There are a couple ways to mess this motion up. One being by starting with square hips in reference to the pole. This will only allow your leg to draw a quarter of a circle, and cut off a lot of that juicy momentum our legs conjure up for us in this movement. So always remember to shift your hips away from the pole before you begin your fan kick. Second, it’s common to see the legs brought out too far from the body. Try to bring your legs up higher to your face as the legs move. Your abs will resist less weight when your legs are closer into your center of mass, making this motion easier.

Now that the legs know what they’re doing let’s come off the ground and start our first fan kick. I usually use a strong hold for my fan kick. I cover this hold a lot more in the invert tutorial I posted, but briefly walk into the pole with your inside arm attached to the pole. Move your inside hip to the front of the pole and close any space between your side and the pole. Grab with the other hand and engage your back. You don’t actually have to lift your body with the strong hold until your legs start moving in that fan kick motion. As soon as you fling the legs in the fan kick, you’ll feel your upper body react by automatically supporting you while your legs are doing their thing. Notice how my body turns in the same direction my legs are moving. Don’t try to resist this twisting. Allow your chest to roll over the pole a bit, so we can get as much momentum as possible. Most beginners think you have to be really strong to lift your legs up and over. That isn’t true. If you take advantage of how aggressively and loosely we’re throwing our legs across the pole, you’ll find that your abs and upper body barely does any work to lift you. Again the key here is being loose with your hips. It takes a lot more energy to rigidly lift our legs. So try to think of your legs as loose appendages throwing across the room. Hopefully that makes sense, but it makes a massive difference in your fan kick.

Now if that’s looking clean you can start spicin your fan kick. We’ll begin in a different grip than the strong hold. For this variation. I’ll take a pistol grip with the bottom hand. That means my index finger is pointing down the barrel of the pole and my other fingers are wrapped around the bar. I’ll be pushing down through this bottom arm and pulling up and towards my face through my top arm in a standard grip. The top hand should be placed a little higher than my head, so I should have a bend in this arm, which will allow my biceps to contract more. As the two arms push and pull, I should feel my body twisting towards the same side of my top arm. If I engage enough I should feel I can start levitating off the ground. As we combine the leg fan motion with this grip you’ll notice once again the upper body turns on automatically to support the quick movement of the legs. As the legs approach the fan kick, once again I start shifting my inside hip away from the pole and then opening my legs up. The outside foot is also providing a little boost as it explodes off the ground as the inside leg is flung open. My legs should not shoot up vertically however. They should come up at an angle. So in the previous fan kick version, it was good to bring your feet as high and vertical to your face as possible, but in this version that’s not okay. The reason is because if we were to bring the legs close to our face we are more likely to collide with the pole. We want our center off mass to be distributed away from the pole.

If you’d like your legs to go higher or move more aggressively, reference my previous comment on loosening up your hip joint, and fluidly allow the legs to travel up and over. It can take a while before you feel confident enough to put a lot of power in this movement. So just focus on where your support is coming from in the upper body. Train your brain that your face will not smack into the pole, and this is a safe movement. After a while you can increase your power output and begin more aggressive kick entrances. But if you do feel like your face and body is too close to the pole when you’re in the middle of the motion, that tells me you’re not pushing away from the pole enough with your bottom arm, and your top arm is pulling you in way too much. And or, you are kicking up vertically instead of at the angle I was talking about previously.

One thing you may be picking up on is the amount of twisting our bodies are doing. You’ll see here my hips are kind of cupping around the pole before I land. Just like the standard fan kick in the strong hold, you’ll feel that torsion here, and that’s normal. If you’d like your legs to look a little more straddled in this fan kick variation you’ll have to be more very diligent about opening your legs up wide at the high point of this kick and not letting too much of that twisting sensation build up. When I say high point, I’m referring to the point at which your legs are the highest in the air. You’ll know it’s the high point because your body actually accelerates up, starts to decelerate up, pauses at the high point and accelerates back to the ground. I’m sorry for the physics lecture, but that’s literally all pole dancing is, physics in action. As you hit this straddle in your high point, your bottom arm has to take the bulk of your weight, as this is our most vertical position. Most of our weight is stacked over this bottom arm as your feet and legs point up. Your top arm will have to ease up on pulling your body towards the pole as well, so you can cut off some of that twisting sensation.

Now for my favorite fan kick variation. I love this one because it looks like I’m kicking someone. So we’ll start in the same grip as the last variation we looked at. Entering this kick by once again exploding off the outside foot, and the inside hip is turned away from the pole. This time however, instead of opening in that fan kick straight leg approach we’ll be tucking our legs in. You’ll probably feel more of that twisting torsion feeling. Again, normal. Now again, once you hit the high point of the movement, you’ll extend the top leg like you’re kicking someone. 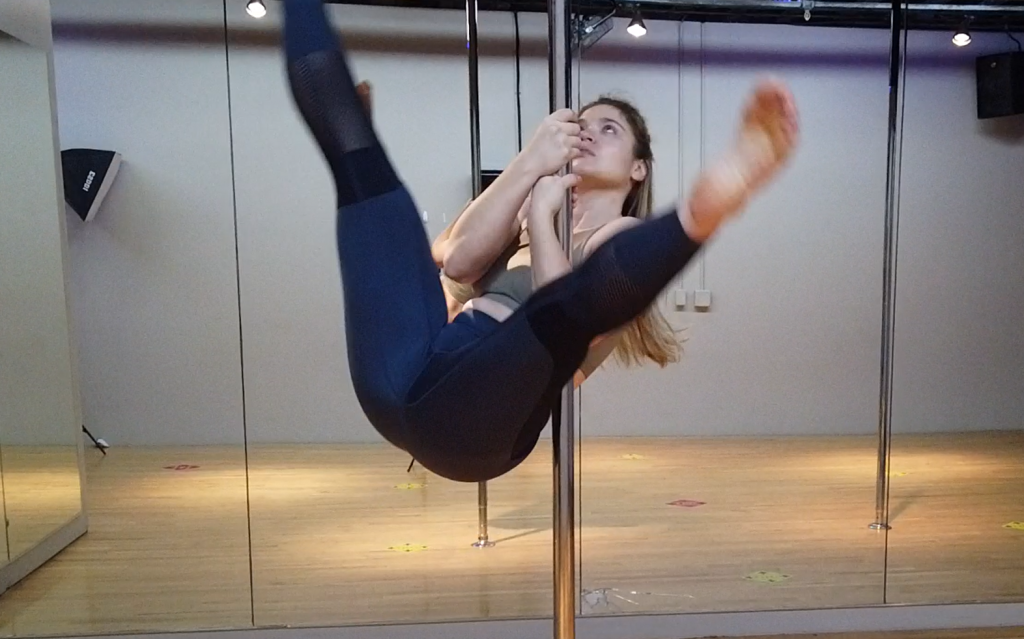